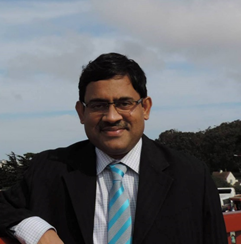 Dr Kaushik Banerjee became the Chairman of AOAC-India Section in 2018. As the Past President, Dr Banerjee provided strategic support and thought leadership and cultivated relationships with various key regulatory bodies and industry professionals across borders for an all-embracing development of the Section. In 2018, he has been recognised for his outstanding service to the Section by AOAC INTERNATIONAL at the 132nd annual meeting, held in Toronto, Canada.

A Principal Scientist at ICAR-National Research Center for Grapes (NRCG) in Pune, Dr Banerjee leads the National Referral Laboratory (NRL-NRCG), which has received a worldwide fame as a Centre for high quality research output largely due to his pioneering research, new strategies, networking with cross-cultural scientists and exceptional manpower building capacity.

Before joining NRCG, Dr. Banerjee obtained his PhD in Agricultural Chemicals from the Indian Agricultural Research Institute (IARI), New Delhi with a focus on pesticide residue chemistry, followed by his postdoctoral studies at the Institute of Environmental Research, Technical University of Dortmund, Germany.

Over the past decade, Dr Banerjee has been actively involved in implementing the agrochemical residue monitoring plan of Agricultural and Processed Food Products Export Development Authority (APEDA, The Ministry of Commerce, The Government of India) for the promotion of the export of fruits and vegetables to the European Union countries. In this role, he has successfully coordinated the efforts of the grower community, exporters, food testing laboratories, government regulators, crop protection industry, researchers, educational institutions, and policy makers in establishing a successful web-based residue monitoring system in India on horticultural commodities. In the process, he has promoted the adoption of cross-regional data sharing, streamlined assessment approaches and worked tirelessly to resolve trade related regulatory issues.

Under his leadership, Dr. Banerjee’s laboratory has participated in various projects on chemical contaminant analyses that have resulted in a prolific number of informative and practical problem oriented publications in peer-reviewed journals and as book chapters (https://nrcgrapes.icar.gov.in/KBanerjee-Publications.htm). His research set precedence in how future and modern multiresidue pesticide analysis procedures are conducted. He has served as a guest editor for two special sections in the Journal of AOAC INTERNATIONAL, and also contributed to many AOAC Expert Review Panels. In addition, he regularly contributes to the Food Safety and Standards Authority of India (FSSAI) Scientific Panel on issues related to MRLs, the analysis of pesticide residues and other food contaminants.

For unravelling the complexity of advanced chromatographic and mass spectrometric techniques for detecting chemical residues in food and environmental matrices, Dr Banerjee has been invited to deliver lectures to a number of international meetings and conferences – the IUPAC’s Crop Protection Conference, American Chemical Society-IUPAC Conference, AOAC Annual Meetings, European Pesticide Residue Workshops, Fresenius Conference and Latin American Pesticide Residue Workshop to name some. He is also an empanelled trainer on agrochemical residue analysis in the International Atomic Energy Agency, Austria and an accredited ISO 17025 NABL assessor.

Dr Banerjee’s extensive contributions have earned him numerous national and international laurels. He received the prestigious Harvey W. Wiley Award of AOAC INTERNATIONAL in 2017. His recent national awards include Recognition Award of the National Academy of Agricultural Sciences and Platinum Jubilee Lecture Award of Indian Science Congress Association. Earlier, he has been also named as a Fellow by the Royal Society of Chemistry (FRSC), London, Indian Council of Agricultural Research (ICAR) and National Academy of Agricultural Sciences (NAAS).

At AOAC-India, Dr Banerjee continues to define his leadership by placing genuine trust in his fellow members and his interminable belief that analytical sciences can change the world for the better. As he envisions, this Section would inspire several students, researchers and laboratory professionals to understand and expand knowledge in the field of analytical sciences. He also wishes that analytical chemistry as a discipline gets the recognition it deserves.